Today 4 peace activists were arrested at the Ministry of Defence in Whitehall as people from the XR Peace group lay down on the entrance steps to draw attention to the military’s contribution to climate change and to protest about the UK’s own aggravation of the serious risk of catastrophic nuclear war.

The four arrested are Jane Tallents and Brian Larkin, both from Midlothian, Ann Kobayashi, from Wickford in Essex, and Zelda Jeffers from Basildon. It took around 40 police offers and more than an hour to clear the entrance.

David Mackenzie, who was dragged off the steps by police but not arrested, said:

“There is a planetary crisis, with oncoming disastrous climate change, the risk of bio-diversity collapse and the ever-present threat of the unimaginable horrors of nuclear war. All demand a worldwide awakening and a word-wide response. Being in London this week has given me hope that such an awakening is possible. It has been humbling to witness the commitment, the imagination, the human connection and the steadfast adherence to non-violence even under aggressive police pressure. I think we all have to catch up, and quickly, before it is too late.”

XR Peace continue this week as part of the London Rebellion. 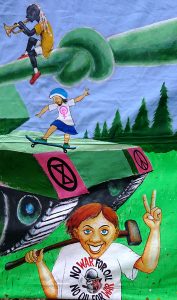 We use cookies to ensure we give you the best experience on our website. If you continue to use this site we'll assume that you're happy with it.That's OK!Privacy policy